1.) I always participate in exhibitions I am curating, and 2.) I always create a catalog and a video to commemorate the event.

This is an installation artwork addressing the deterioration of the Dead Sea and its slow demise – a two ton Salt Mound in a box with water dripping on it from two medical infusion bags symbolizing the slow drip of the Jordan River into the Dead Sea deteriorating it’s unique character.

Images of the breakdown: ecological, political, religious issues, and the extraction of vital minerals are displayed on posters on the walls written in three languages: Hebrew, Arabic and English. A projected video displays my trip to Jericho where the Jordon River empties into the Dead Sea.

Salt Mound was originally exhibited as part of the Jerusalem Biennale 2017 on display at the Museum of Underground Prisoners, curator: Ori Z. Soltes, organized by the Jewish Art Salon, Yona Verwer, founder/director

A second installation of Salt Mound was at the Derfner Judaica Museum in Riverdale, New York, Director: Susan Chevlowe, PhD.

The Past Four Years

On January 19, 2010 I had a serious car accident. The car I was driving rolled over and I cracked my second vertebra. I now have a permanent fusion of my upper neck vertebrae 1-2-3 and my ability to move my head from side to side has been reduced 40 percent.

To help heal myself I walked in my garden wearing my ‘halo’ – a head and neck brace I wore following surgery. In this unusual state I connected with the image of my shadow I saw on the ground, on trees and on walls. I photographed these images with my iPhone. My halo became a crown and a symbol of my recovery. 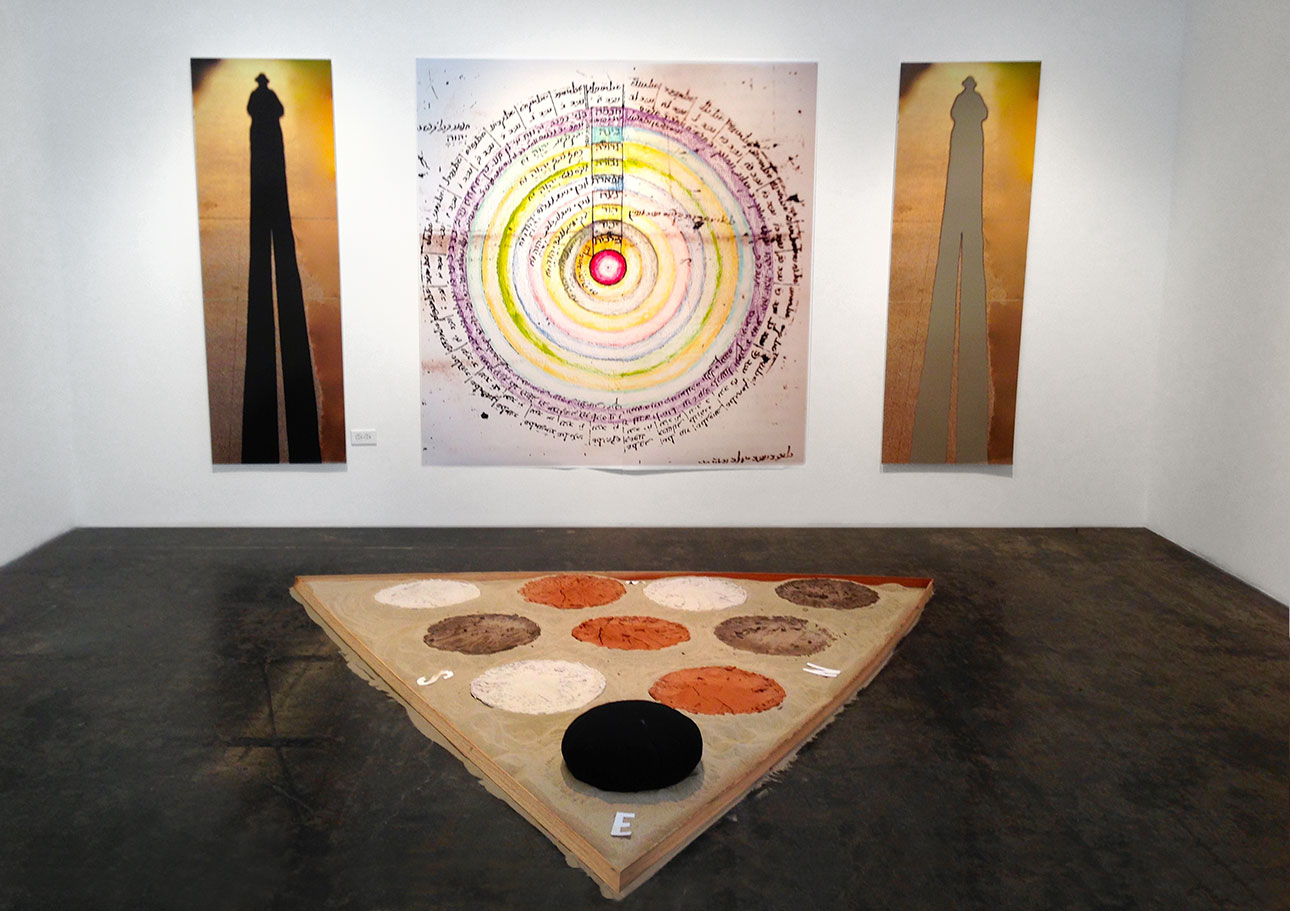 Floor: sand and clay with meditation pillow
Wall: Shadow photographs, each 72″ x 24″ and
Cabalistic image from the 8th Century, 72″ x 72″ 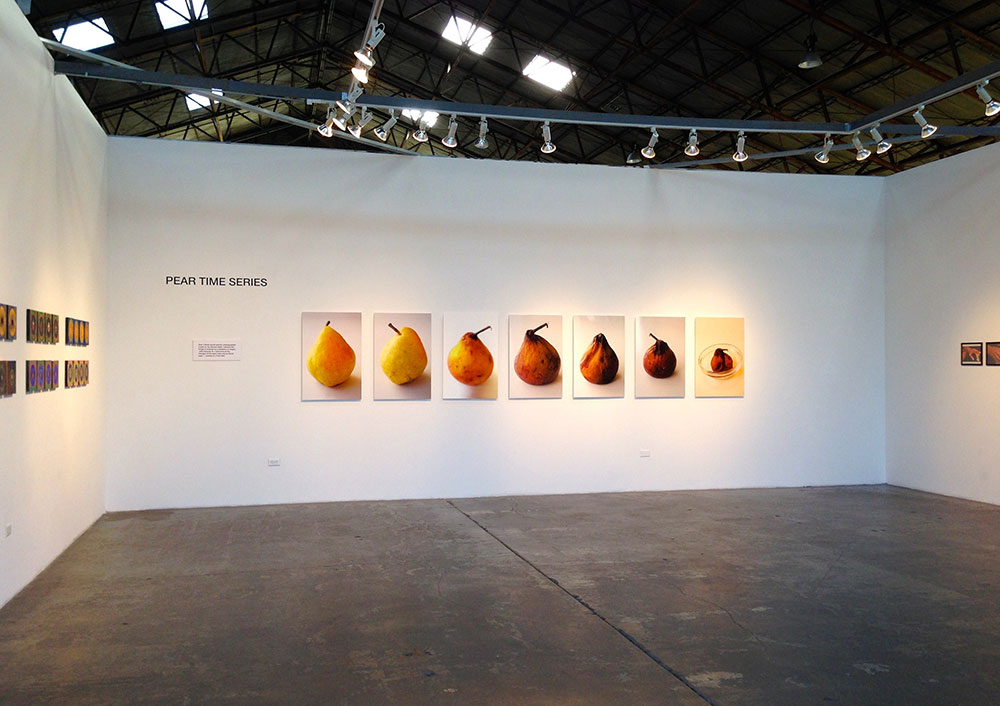 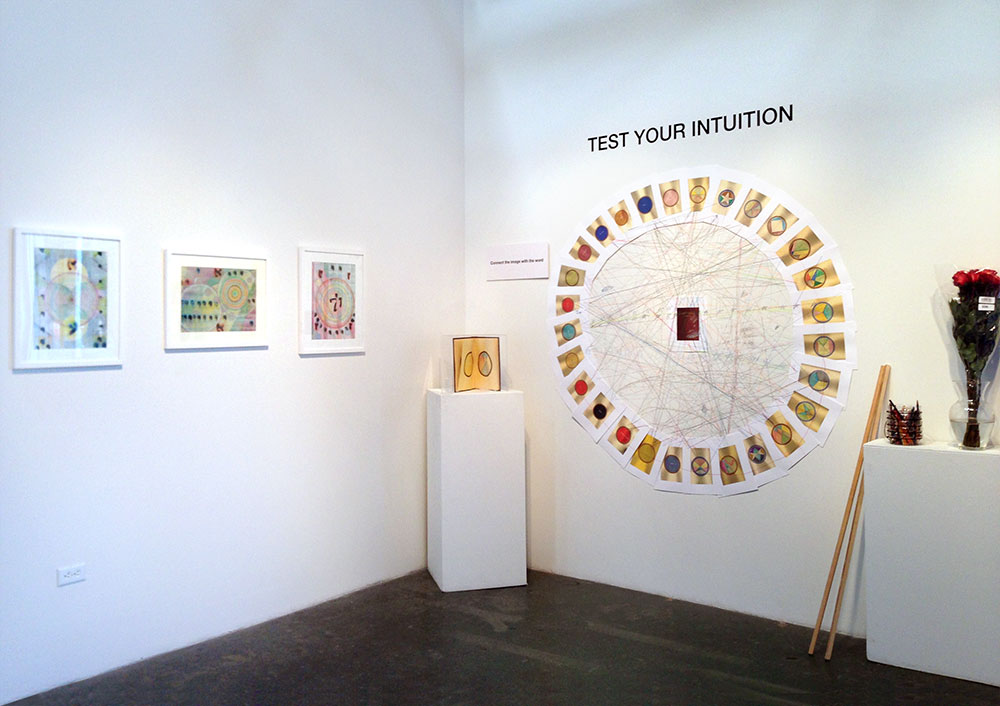 The Book of Symbols – connecting lines/play

The letter Aleph always intrigued me. The first letter of the Hebrew Aleph-Bet, it has no actual sound: you open your mouth and simply exhale. Only in combination with other sounds or the vibration of the vocal cords does it take on a presence. The physical attributes of the image of Aleph reaches the four corners of the earth with a space at the center of touch.

The Kabbalah, something my grandfather practiced, carried a mystery for me. It was taboo for women to get involved in Kabbalah and that immediately caught my interest. Kabbalah is the study and the practice of the feminine deity of G-d, the Shechina, the muse or the spirit, was available only to men 40 years and older to learn and practice. The female is the arbiter between God and men. My search and interest in the Kabbalah brought me to a wealth of imagery and the practice of mediation while creating art.

When I received a call from Sabine Sighicelli and a group of women artists asking if I would curate an exhibition of Artists/Mothers I was intrigued by the challenge. I am the mother of four and have been an active artist while raising my children. I recall reluctance in the 1970s to announce the presence of children in my life, even though I had always included them in every aspect of my work. I found that many women were told the same thing and were not encouraged to reveal the fact that they were mothers. Today younger artists/mothers say they see changes and find no discriminatory behavior against their art.

Some of the work I chose for the exhibition, in collaboration with the artists, represent an early period of time in their lives as artist/mother: where the work itself integrates the maternal experience, the relationship to the body, the child, the family and society at large. This was the criteria I chose to focus on.

This exhibition, Emphasis Santa Monica, is focused on contemporary living artists who both live and work here. Many artists have expressed, in their comments on Santa Monica, that what primarily attracts them to this part of the Southland is the light, the proximity to the Pacific Ocean and the tolerant community.

This is an eclectic exhibition. Its intent is to show the variety of work being created NOW. The work presented in this exhibition is vibrant, good, and powerful.

The emphasis on women artists’ work is important and long overdue. This exhibition attempts to create a bridge in time. The 30 year span between Then (the 1970s) and Now (the present) represents many years of work and progress by the artists in this exhibition.

Today, more than ever, we need women’s sensibilities to break the pattern of wars and violence that dominate life and to revive the spirit of peace.

Across Time, Space and the Ages, Stadtmuseum Düsseldorf

From the Catalog – Los Angeles artist Bruria seeks to give form to that which is ultimately formless: the Word. Whether the Word of God or of Man does not matter; in fact, in Judaism – particularly in mystical (i.e. Kabbalistic) thinking – the Word is a power in and of itself, an integral energy which, it might be said, relates to God and Man the way the Holy Ghost in The Christian Trinity relates to the Father and the Son. Whatever the Word might be, it remains, in the words of Genesis, “void and without form” – a resonance going back to the Creation, the breath of God breathed by man. In The Beginning Was The Word.

A visual artist seeking to derive imagery and structure from such supremely disembodied abstraction must certainly be the victim of folly. but, then, any good artist is such a victim; real artists are invariably beckoned by some sort of rainbow, some chimerical vision or idea, whether spiritual or political or corporeal or cerebral, that transcends quotidian sense. Bruria has evolved her imagery of forms out of a realm of symbols derived from the thinking of Abraham ben Samuel Abulafia, a 13th century Iberian Kabbalist – who believed that the word was superior to the image.

From the Catalog – An artist expresses the essence of reality by the image or images created. The images are, in fact, symbols. A “symbol” suggests special implications in addition to its conventional and obvious meanings.

The wheel is a common object known all over the world. Bruria’s work, The Divine Chariot, delves into the symbolic significance of the wheel. It evokes “a myriad of symbolic references from the ancient world to the present.”

From the Catalog – A superb example of this bold art which authoritatively addresses itself to deeply religious ideas is Bruria’s The Divine Chariot. The work consists of four sculptures intended as a personal and artistic commentary on the 13th century Spanish Kabbalist Abraham Abulafia’s interpretations of the Prophet Ezekial’s vision of the divine chariot.

In the work, Bruria delves deeply into the recesses of her own ethnographies-religious heritage as filtered through the prism of her own 20th century artistic, stylistic and conceptual base. In so doing, she creates a meeting place for the abstract and complex nature of contemporary form with the arcane and abstruse meanings of the mystical Jewish past. What evolves from this encounter is the true expression of Bruria’s existential self—an evocation of who she is artistically and who she is as a “spiritual” citizen of a people with a four thousand year old history of theological ideas and experiences.